You already know what major currency pairs are. For reminder, major pairs are all pair that include the US dollar as either the base, or the counter currency, such as EUR/USD and USD/JPY.

Cross pairs don’t include the US dollar. When the forex market gained momentum after WW2, in order to exchange Swiss francs for Japanese yen for example, investors had to exchange the Swiss francs first for US dollars, and then the US dollars for Japanese yens. Fortunately, with the invention of cross pairs this is no longer the case. One can immediately exchange their national currency for the desired currency. Examples of cross pairs are: EUR/JPY, EUR/CHF, GBP/JPY, AUD/CAD and others.

While the major pairs are all linked to the US dollar and its performance, currency crosses can give a variety of trading opportunities regardless on how the US dollar is performing. Traders around the world track the US dollar because it has the largest impact on the forex market. In fact, more than 80% of transactions include the US dollar! If the dollar performs well, this will usually universally reflect across all major pairs that involve the US dollar. Take a look at the following chart and notice how the performance of the dollar affected other pairs. 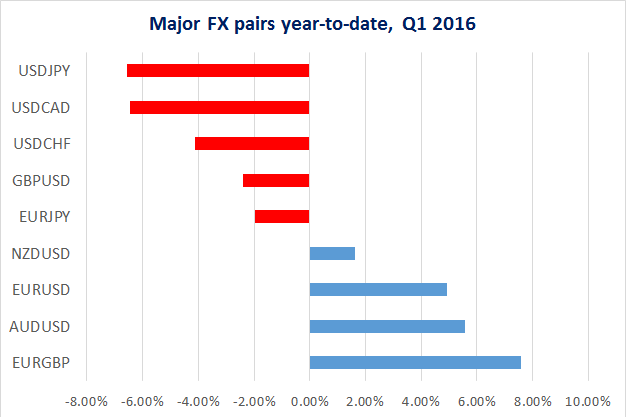 On the contrary, trading currency crosses opens a variety of trading opportunities with a limited impact of the dollar performance.

As the largest economy in the world, the United States regularly report a lot of economic data which have a significant impact on the forex market, especially the major pairs. Those reports often cause huge spikes in pairs that include the US dollar, which can make it more difficult to spot beginnings of trends or reversals. On the other hand, cross pairs often have a smoother price action making them less stressful to trade than the major pairs. Take a look at the following chart with the EUR/USD on the left, and GBP/JPY on the right. The cross pair made a much smoother ride to the bottom, with less spikes, than the EUR/USD pair.

A popular example of carry trades is the AUD/JPY trade. The Reserve Bank of Australia had raised its interest rates to 6.25% from 2002 to 2007, while the Bank of Japan kept their rates at record low 0%. As a result, the Australian dollar skyrocketed in value against the Japanese yen. Not only did traders profit on the AUD appreciation, but also on overnight interest rollovers on both currencies as they were long on AUD and short on JPY.

Any cross pairs that don’t include the euro or yen can be very difficult to trade. Those include pairs such as AUD/CHF, CAD/CHF, AUD/NZD and others. Since very few traders trade these crosses, their liquidity is usually low which results in huge price fluctuations. In addition, these pairs tend to have very wide spreads, so you would better avoid them all together unless you have a secret trading strategy for obscure currency crosses! The following chart shows how hard it can be to trade these crosses, like NZD/CHF for example. 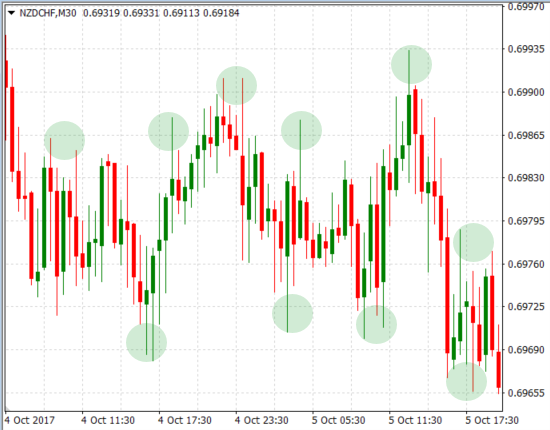