What is the Elliott Wave Theory?

The Elliott Wave Theory, named after Ralph Nelson Elliott, is a theory which suggests that financial markets (including the forex market) trade in repetitive cycles which are influenced by the overall psychology of the market participants in the market. According to Elliott, the upward and downward swings in the markets are caused by the expectations of the masses, forming an identifiable pattern of price movement which Mr.Elliott named the 5-3 wave pattern. This means that by correctly identifying the repetitive cycles, traders can predict where the price will move next.

These repetitive cycles are called “waves”, which can be further divided into impulse waves and corrective waves.

The first 5 waves in the “5-3 wave pattern” are called impulse waves, while the last 3 waves are called corrective waves.

Among the first 5 waves, waves 1, 3 and 5 are motive, which means the follow the direction of the trend, while waves 2 and 4 are corrective.

Let’s take a look at the 5-3 wave pattern in the following graphic. 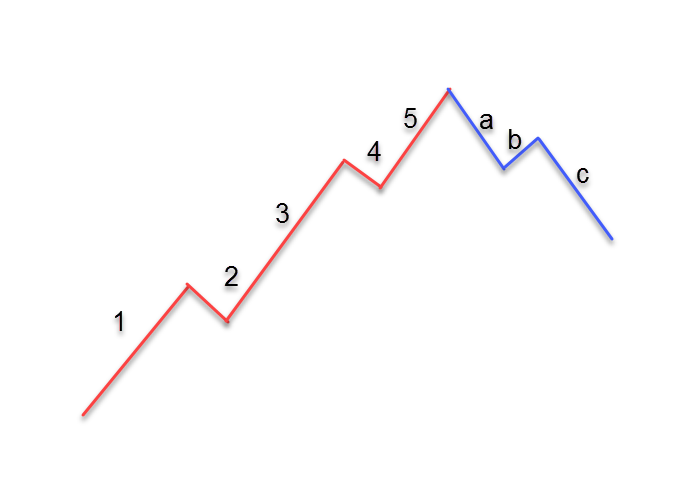 Wave 1 is the first wave of the pattern, which forms when a small number of people feel that the price is low and start to buy the financial instrument, causing the price to rise. At wave 2, some of the investors from the initial wave feel that the security became overvalued, and start taking profits, causing the price to fall. Wave 3, which is usually the longest wave, signals that the security caught the attention of the mass public, who enter the market and cause to price to rise again. At wave 4, some of the market participants take profits again, forming a new corrective wave. And finally, wave 5 is mostly driven by hysteria, where the mass public start buying again on various beliefs that the stock is still a bargain.

This is where traders whose trading decisions are based on analysis and not on following the crowd start to sell the security, forming the first correction move (a). The security makes a new high at point (b) again, before it continues its correction wave (c), with the price further falling down.

There are some important rules which you should pay attention to:

This was the brief explanation of the Elliott wave theory and its impulse (1,2,3,4,5) and corrective waves (a,b,c). 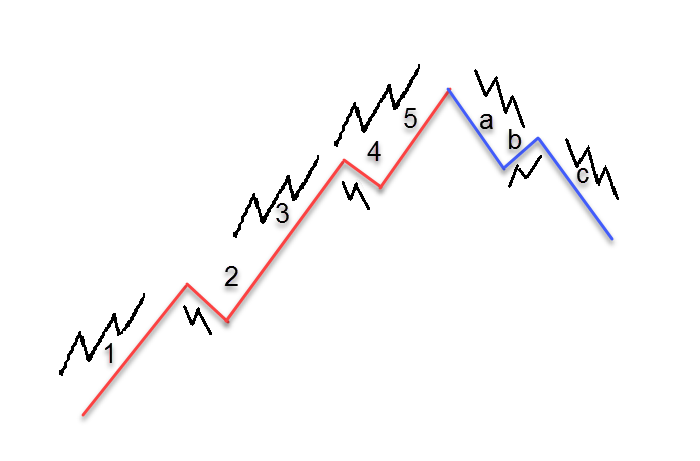 While looking at a chart, you will probably not see perfect waves right away. Instead, as each wave consists of smaller waves, which also consist of smaller waves etc., you need to look for the 5-3 wave pattern. Knowing how the whole cycle of Elliott waves looks like, it will be much easier for you to spot and trade this rewarding technical concept.

How to Trade with Elliott Waves

Let’s say you open up your trading platform and see something like this. 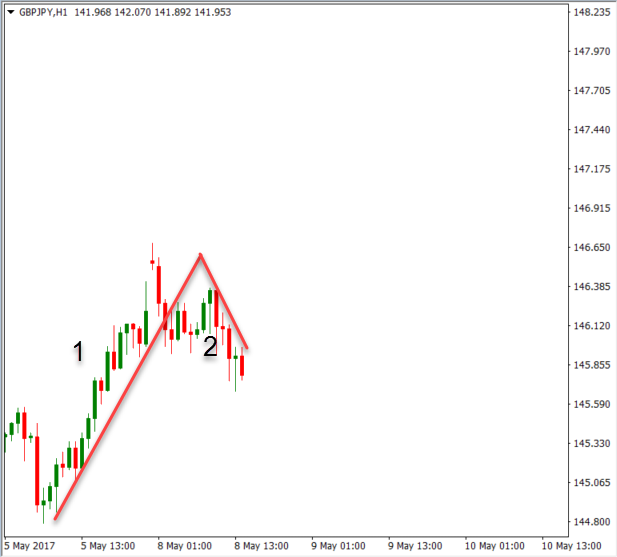 You can immediately identify that after an up-move (wave 1), the pair makes a correction move (wave 2). As you already know how Elliott waves form, you predict that the strong third wave is about to start and look for a level to enter. This is where you use the Fibonacci retracement levels, which we’ve covered in the previous articles. Elliott waves tend to respect Fibonacci levels for their correction moves. Let’s draw the Fibonacci levels on our chart. 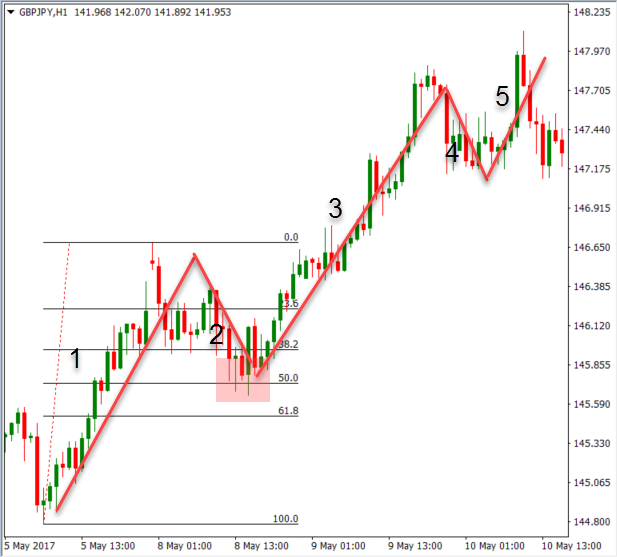 As you can see, the correction move touched the 50% Fibonacci level before it continued to trade upwards. This is where you would enter your long position (red area), and catch the third wave! A stop loss order could be placed just below the 50% Fibonacci retracement level.

Elliott waves are among the hardest technical tools to master. You need to look for the impulse and corrective waves, as well as for fractals inside the waves to correctly identify all the Elliott waves. According to the 5-3 wave pattern, a complete Elliott wave cycle consists of 5 impulse waves making higher highs and higher lows, and three corrective waves making lower highs and lower lows. The first 5 impulse waves can be divided into motive waves which go in the direction of the trend (waves 1,3 and 5), and corrective waves which go against the trend (waves 2 and 4). Each of the waves consist of smaller and smaller waves, called fractals, which look the same as the bigger waves. Elliott waves often respect Fibonacci retracements, which can used to identify price levels for entering the waves at their beginning stage of development.

Summary
Article Name
What is the Elliott Wave Theory?
Description
Elliott waves are among the hardest technical tools to master. You need to look for the impulse and corrective waves, as well as for fractals inside the waves to correctly identify all the Elliott waves. According to the 5-3 wave pattern, a complete Elliott wave cycle consists of 5 impulse waves making higher highs and higher lows, and three corrective waves making lower highs and lower lows.
Author
ForexTips
Publisher Name
ForexTips
Publisher Logo