Inverted Hammer Pattern
The inverted hammer pattern forms at the bottom of a downtrend, and is a reversal pattern consisting of two candlesticks. It looks just like a hammer pattern, but inverted. It has a small real body and a long upper shadow, and forms after a long black candlestick. Buyers were dominant at the beginning, but sellers prevailed in the end and closed the session near its opening price, creating a long upper shadow. The following chart shows what an inverted hammer looks like. 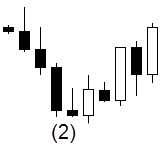 This formation reflects that after a session where buyers dominated (the white candlestick of the formation), in the second session the price opened even higher, after which sellers regained their power and outperformed the buyers. In this situation, the buyers are not as much convinced in their long position as they were before. This is a signal that the uptrend could end and reverse. But bear in mind that the engulfing patters are more dominant than the dark cloud cover patterns. If the second session’s black body of the dark cloud cover pattern would totally cover (engulf) the prior white body, a bearish engulfing pattern would form.

The Morning Star
The morning star consists of three candlesticks, and is a bullish reversal pattern. The morning star appears after a downtrend, with a small candlestick forming with a gap away from the previous session’s close. The small real body of the candlestick represents an equilibrium between supply and demand, and a downtrend will likely reverse under such conditions. The third white candlestick of this pattern closes deep inside the first black candlestick’s real body. The following picture shows the morning star pattern.

The morning star pattern. The color of the star’s body is not important

There are a lot of Japanese candlestick patterns, and it might be hard for you to remember all of them. That’s why we will give you an overview of all the major and minor candlestick patterns, so you can easily identify them on the chart. The following cheat sheet will help you with this. 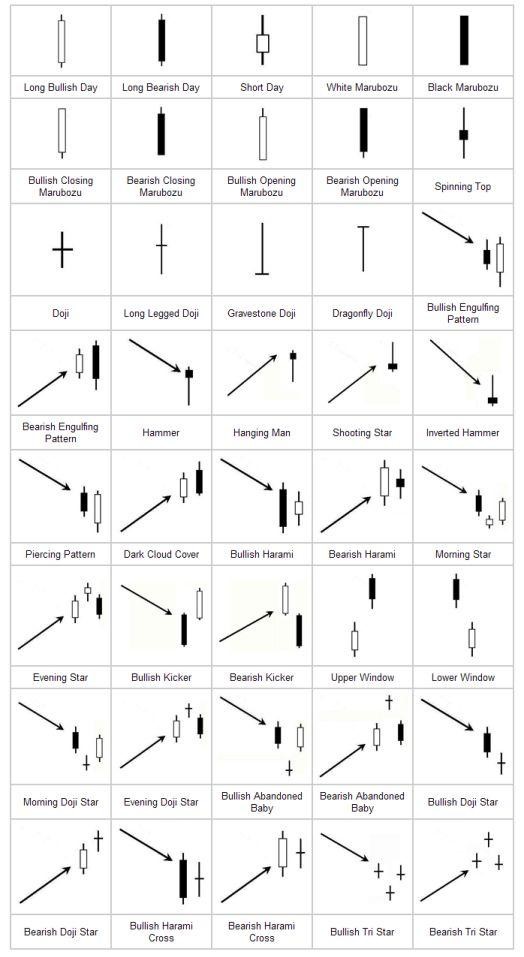 Understanding and trading the Japanese candlestick patterns is a rewarding tool for every trader, and should be learned in the early stages of your trading career as these patterns truly represent the fight between bulls and bears in the market. Knowing candlestick patterns gives you an excellent overview of the supply and demand of a currency pair. These patterns are also followed by big players in the forex market, which give additional importance to these patterns and make them a valuable tool to predict future price-action.

Although some of the major patterns can be traded independently without confirmation signals, you will see the best results if you combine candlestick patterns with other types of analysis, and wait for confirmation signals before entering a trade based on this technique.

Summary
Article Name
Dual and Triple Candlestick Patterns
Description
Knowing candlestick patterns gives you an excellent overview of the supply and demand of a currency pair. These patterns are also followed by big players in the forex market, which give additional importance to these patterns and make them a valuable tool to predict future price-action.
Author
ForexTips
Publisher Name
ForexTips
Publisher Logo