It’s also important to note that when a support breaks, it becomes a resistance in the future. Similarly, a break of the resistance will act as a support afterwards. Although support and resistance lines can be used on any currency pair and time frame, they become more important with longer time frames.

As pictures oftentimes best describe new concept, here is an example of support and resistance in the forex market. 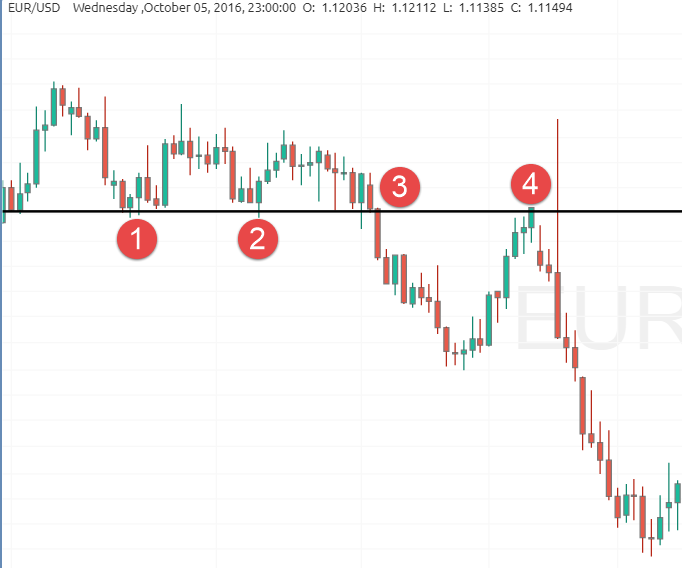 Trend lines are another basic tool in a trader’s technical toolbox. A trendline connects multiple lows or highs, and the line itself is then projected into the future. Traders use trendlines much like they do support and resistance lines, only the trendlines need not to be horizontal lines. It is expected that the price will bounce of the trendline, and the trendline becomes more important with each price-bounce off the trendline. A downward trendline is shown on the following chart.

If we extend what we’ve said about trendlines by drawing a parallel line with the same angle as the initial trendline, we will have created a channel. Channels are another popular tool when it comes to a forex trader’s technical analysis, just like support and resistance or trendlines. Let’s see what a channel looks like.

By connecting the higher highs (points 1, 3, 5, 6 and 7) and higher lows (points 2 and 4) with two parallel trendlines, we’ve created a channel on EUR/USD. The price bounces off the upper and lower trendline of the channel until it finally breaks the lower trendline at point (8).

How to Trade Support and Resistance

Trading support and resistance lines, trendlines and channels are a popular trading strategy. However, this strategy is usually used in combination with other types of analysis, like fundamental to reveal ideal entry and exit points.

Test Your Knowledge: Support and Resistance

What is support and resistance?

Summary
Article Name
Understanding Support and Resistance in Forex Trading
Description
Support and resistance are the most crucial concepts in technical analysis. Simply said, a support price is a price where the market should have difficulty to fall below (i.e. it will find “support” on that price level), while a resistance price is a price where the market will have difficulty to break above (i.e. the market will find “resistance” on that price level).
Author
ForexTips
Publisher Name
ForexTips
Publisher Logo