Just like with stock markets, the news is ultimately what makes currencies move. Traders around the world closely watch forex news and announcements, which can change their perception of the market and a particular currency in a matter of seconds. This is what makes support and resistance lines break, and how trends reverse and establish. Knowing the fundamentals and market perception by following the news is just as important as knowing the main technical levels of a currency pair.

Trading the news can be very profitable if you correctly predict how the market is going to move. However, news trading has also its drawbacks. Spreads can widen significantly during major news releases as traders bet heavily on one side of the market. This will also increase your transaction costs, as spreads can widen as much as 50 pips in some cases! In addition, slippage can occur when you try to open your position, which means that your order might not be triggered at the price at which you placed your order, but at a far different price.

When trading the news, you should stick to the majors as they are the most liquid pairs and can help to lower your transaction costs (spread) and slippage during important news releases. The most liquid currency pairs include EUR/USD, GBP/USD and USD/JPY, and these three pairs are also the most traded pairs worldwide.

The price volatility just before the news release can also be hectic and without a clear bias, as market participants open their speculative orders and try to guess how the release will affect the market. The following table shows the times at which various countries release their important news. 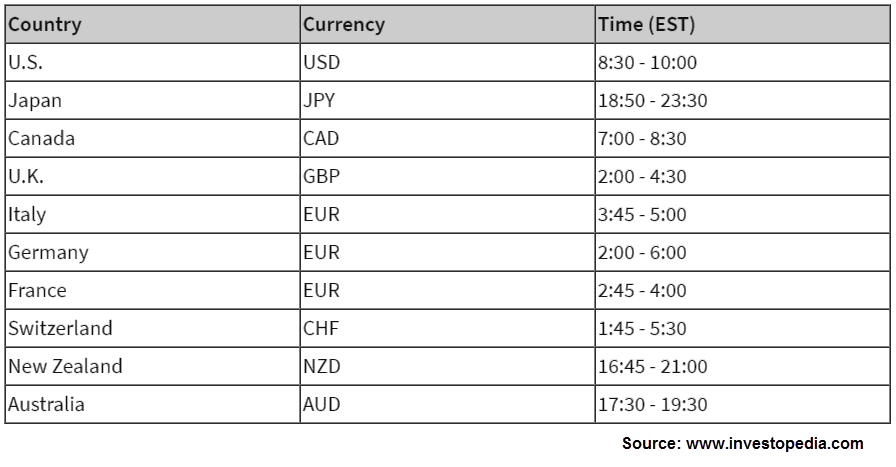 Which News Releases Should I Trade?

There are many news releases in the forex market on a daily basis, but the most market-moving releases tend to be those related to the US dollar. The dollar is the world’s most traded currency, as well the main reserve currency of central banks worldwide, which makes the dollar-related news the most important in the market.

The following table shows which releases move the market the most:

Out of these news, the labor data (unemployment and NFP) tends to have the largest impact on the market, with an average pip movement of more than 140 pips on the EUR/USD pair during the release.

Buy the rumors, sell on the news.

You will often hear this phrase not only in the forex market, but in other financial markets as well. This phrase refers to the fact that most traders trade based on their own market expectations for a given news report (the rumor). Once the report shows that their market expectations were incorrect, they will close their positions and the market will move in the opposite direction. Rumors will have one effect on the currencies, and news (actual numbers) can have an opposite effect.

How to Trade the News with a Directional Bias?

News can be traded in two ways:

Trading with a directional bias means that you already have a guess on what numbers will be released in the report and where the market will move. Let’s go back to our example with the US unemployment rate. You could research what the consensus and actual number were in the past, and try to guess what the actual number will be now. Remember, we said that the consensus number is 5.5%.

Let’s say the US unemployment rate was steadily increasing in the past months, which brings you to the conclusion that the actual number could be worse than the consensus number. This would lead to a fall in value of the US dollar, and you have a directional bias about that.

Trading with a non-directional bias means that traders don’t have a guess on where the markets will be going, but they do know that news releases will create sufficient price volatility to profit from wherever the price decides to go! Essentially, you are prepared to trade the market in either direction, and don’t worry much about the actual numbers that are released.

Trading with a non-directional bias can be done with the straddle strategy. In general, you would place two limit orders before the news release: one above the previous swing high, and one below the previous swing low. When the numbers are released and the market starts to move, one of your limit orders will be triggered and you will have an open trade just by trading the market volatility of the news release! The following chart shows how the trade with the straddle strategy. 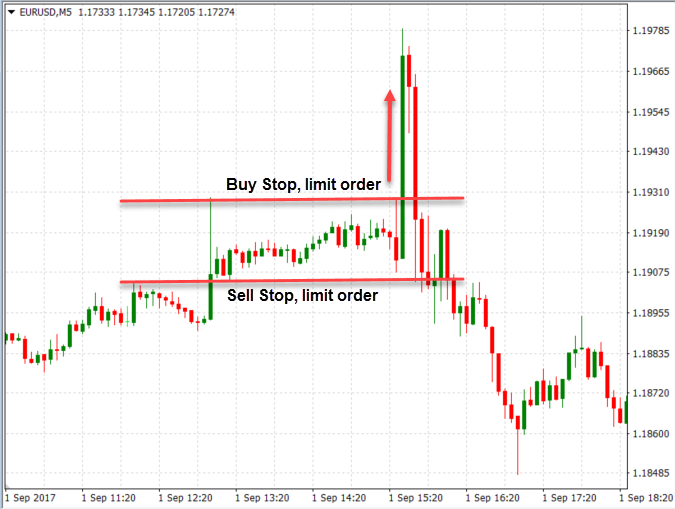 On September 1, the US reported the non-farm payrolls which missed expectations (156K actual vs. 180K consensus). However, by placing two limit orders just like on the chart above, you could catch the huge 50-pips movement just after the NFP release. With a trailing stop of around 10 pips, you could still make a nice profit of 40 pips in 5 minutes. However, as mentioned earlier, due to increased spread and possible slippage, the straddle strategy might be relatively less profitable than taking a directional bias and opening a position before the numbers are actually released.

Trading the news can be profitable if you know how to handle the risk associated with it. There are many news that are released daily and which have a large impact on the forex market, but the most market-moving releases tend to come from the United States.

Test Your Knowledge: Trading the News

Article Name
How to Trade the News in the Forex Market
Description
Trading the news can be profitable if you know how to handle the risk associated with it. There are many news that are released daily and which have a large impact on the forex market, but the most market-moving releases tend to come from the United States.
Author
ForexTips
Publisher Name
ForexTips
Publisher Logo