Candlesticks are the most popular way to display the price of a financial instrument. Invented by Japanese rice traders in the 17th century, their popularity rose in the West in recent decades. Whereas the “western” bar and line charts focus primarily on the open and close price, candlestick charts truly represent the psychology and supply/demand of the markets. Their biggest advantage is in their excellent way to graphically display price-action in relation to prior candlestick bars. With their bodies, which represent opening and closing price, the experienced trader (and beginners alike) immediately “feel” the market in a way best to see trading opportunities.

As you already know from the previous article where we introduced the major types of forex charts, candlesticks are based on OHLC (Open-High-Low-Close) of the price. The opening and closing prices are displayed as the body of the candlestick, whereas the lowest and highest prices of the entire trading day are displayed as the “wicks” on the upper and lower side. If the price closes above the opening price, the body of the candlestick will be light. If it closes below the opening price, the body will be dark, or filled in. 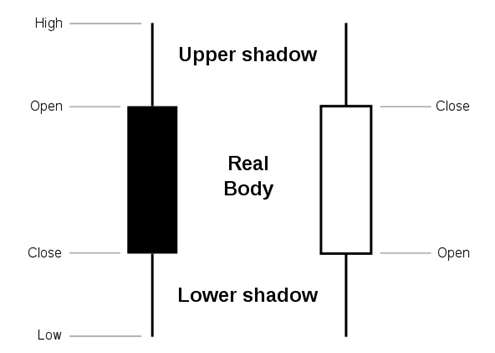 These candlestick patterns have a small body and long lower shadows, and it’s not important if they are bullish or bearish. The following picture shows the “Hanging Man” and “Hammer” patterns.

A formation of these single candlestick patterns shows that after the price opened, the sellers had enough power to outperform the buyers, thus moving the price downward. During the session, buyers regained their buying power and the price moved upward again, closing near the opening price (therefore the small body.)

It sends the message that an upward or downward trend lost steam and a reversal is likely to happen. I would like to ask you to open your trading platform and spot some Hanging Man and Hammer patterns to get a feeling of how they behave. You will probably be surprised after you see how often they form after an uptrend or downtrend finishes!

Summary
Article Name
What is a Japanese Candlestick?
Description
Invented by Japanese rice traders in the 17th century, their popularity rose in the West in recent decades. Whereas the “western” bar and line charts focus primarily on the open and close price, candlestick charts truly represent the psychology and supply/demand of the markets.
Author
ForexTips
Publisher Name
ForexTips
Publisher Logo