Security is still a serious issue in the cryptocurrency world. Japanese investors who awoke Friday morning to check their crypto portfolios at Coin check, a major exchange in that country, would have found that cybercriminals had broken into the system and stole more than 58 billion yen worth of NEM coin. That amounts to over half a billion dollars.

The thieves struck at 3 AM local time. The exchange had the stolen coin stored in a ‘hot wallet,’ or a computer device with all the coin stored on it that was connected to the Internet overnight.

The stolen coin was sent to another account. The Japanese Financial Service Agency is investigating.

Coincheck co-founder Yusuke Otsuka told Bloomberg editors that he didn’t know how the thieves hacked into the hot wallet.

For now, Coincheck has suspended all trading in all tokens other than bitcoin, and has halted deposits denominated in NEM coins.

Coincheck’s founder also reports that they know where the money was sent, and that if they can continue to track the funds, recovery may be possible.

With a total market capitalization of $9.439 billion, NEM is currently the 10th biggest currency by market cap, according to Coinmarketcap.com. As of mid-afternoon, Eastern Time, it was trading at $1.04.

The hack is one of the biggest cybercrimes in history. Nevertheless, as big as it is, even a half-billion-dollar heist represents only about 1/20th of the total market cap. The theft was enough for markets to take notice, as you can see from this graph. 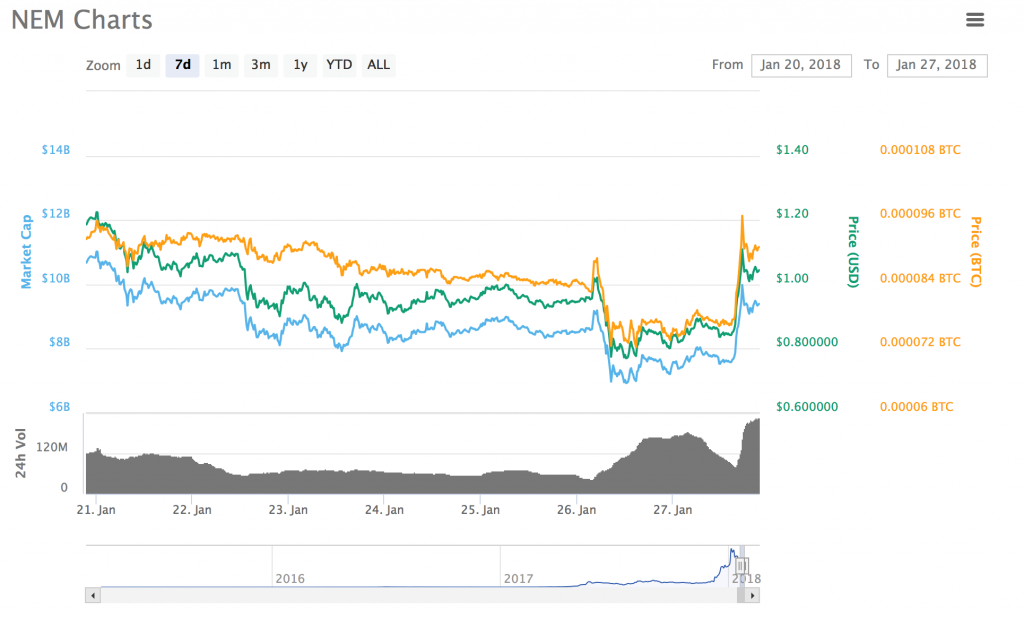 NEM prices in dollars are in green. The orange line represents changes in its price in bitcoin.

There was a quick selloff on news of the compromise: NEM prices fell by about 11 percent, hitting a low of 76.5 cents per NEM token. Markets kicked around the news for a day, though – and decided that NEM was down but not out. Instead, buyers stepped in a day later and bid NEM right back up higher than it was before the breach!

Is that a rational assessment of the risk? Shouldn’t the price be lower than before the compromise, now that we know such a massive theft is possible? Well, maybe not. Crypto speculators in the aggregate already know that large hacks of cryptocurrency exchanges are possible. Those who were following crypto in 2014 will remember the devastating Mt Gox hack. This hack is even bigger than the Mt Gox theft, in terms of the sheer dollar value of the stolen tokens.

The Mt. Gox theft destroyed the platform. But it didn’t destroy bitcoin. Even then, when networks were much more fragile and the market dependent on fewer exchanges, bitcoin survived.

This time around, NEM hack didn’t destroy Coincheck, which has promised to repay 88.549 yen per coin stolen (81 cents in U.S. currency) to account holders who had NEM stolen. Coincheck is far better capitalized than Mt. Gox was in 2018, and may well have arranged cyber risk insurance to protect them against the risk of a data breach.

Other currencies dipped somewhat on news of the Coincheck breach – but mostly by under 10 percent, and generally well within established volatility metrics for each coin. In other words, the market quickly shrugged it off. Markets for cryptocurrencies are much bigger, broader and resilient than they were in 2014.

For example, at the time of the 2014 data breach, Mt Gox accounted about 5 percent of the total crypto trading volume worldwide. Coincheck represents only about

Japanese regulators have been regularly down on crypto trading platforms since the Mt Gox event. It is possible that Japan will shut Coincheck down. But BBC reports that Japan is one of the most pro-crypto governments in the world (which is our observation as well). Furthermore, other platforms are springing up, and they’ll all face the same security challenges as Coincheck anyway.

Criminals are staging an all-out effort to penetrate crypto wallets: In a single month, software security company Malwarebytes reports blocking as many as 250 million attempts to place coinmining malware on PCs, according to the editors of the British Broadcasting Corporation’s news service.

Meanwhile, in another step towards the broad adoption of crypto assets as an asset class along with stocks, bonds, options, forex and futures, the stock trading software company Robinhood is rolling out a mobile trading platform specific to cryptocurrencies.

The company will be doing a soft rollout to California, Massachusetts, Missouri, Montana and New Hampshire, but will expand coverage from there.

For the time being, the crypto trading program will be free. The company plans to use crypto as a differentiator and loss leader to attract crypto enthusiasts to use its platform for other asset classes as well, where it will make its money.

Hardcore technical and chart enthusiasts may be disappointed by the Robinhood product: Charts are pretty basic, not customizable, and only show tick information. There’s also no Web-based desktop or laptop trading platform yet from Robinhood. But the trades are free, and there are no fees for buying or selling ETFs or stocks. So, if you’ve got your own sources of information and you like to trade on the go, and you want to keep your crypto, stocks, ETFs and other assets all on one platform, Robinhood could well be a viable solution, but for a very limited market.

We’re still waiting for the Schwabs, Fidelities and T.Rowe Prices of the world to jump on board, and then we may see a massive inflow of retail money.

Shortly after which will be time to lighten up holdings. 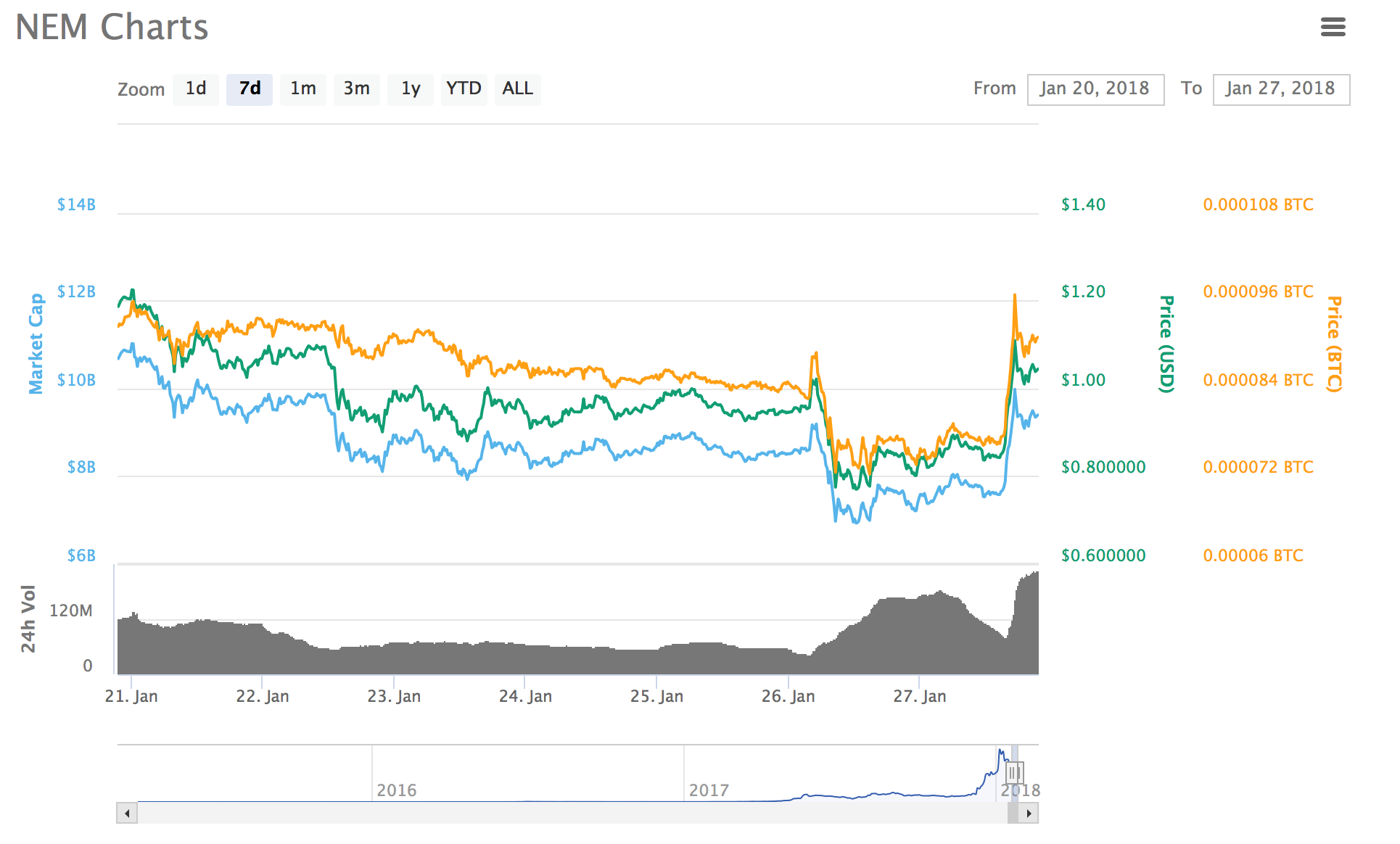 What to Consider When Choosing a Forex Broker – Part 2

In our first article, we discussed the importance of using a Forex broker that...
Continue Reading

Euro Moving Toward Parity with the US Dollar

While the most recent focus of forex traders has been the GBP/USD, many experts...
Continue Reading