But that only hurts the Johnny-come-latelies. If you bought bitcoin before December 1, you’re still sitting on a profit for all those transactions. As of this writing, anyway. 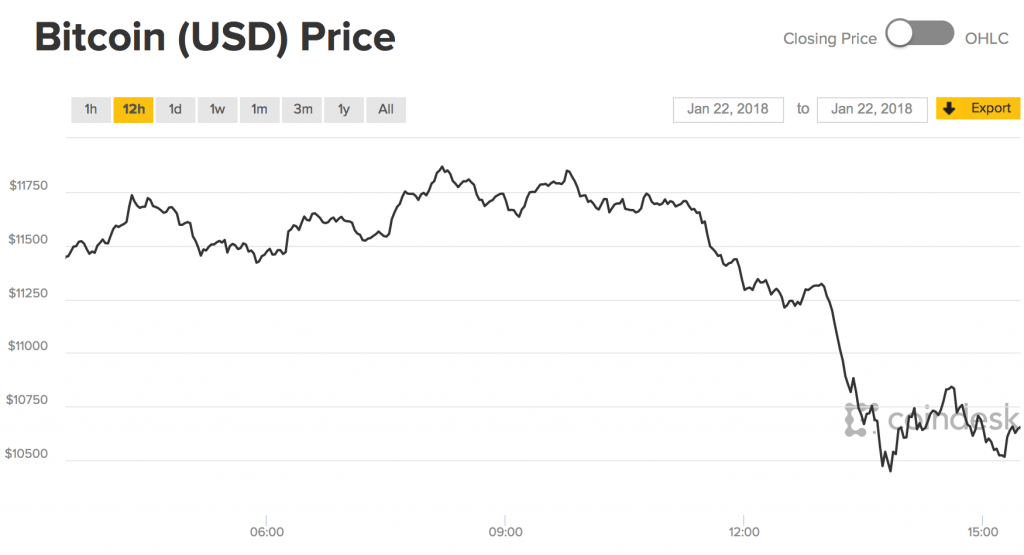 As you can see from this 12-hour chart from CoinDesk.com, bitcoin prices were humming along within a narrow trading band until 1300 UTC, when sellers suddenly pushed the market lower.

Bitcoin fell more than 11 percent over just 24 hours, hitting a low of $10,376 before finding a bit of support, according to Coinbase data.

This morning, technical analyst Okmar Godbole wrote that bitcoin had some price support above $11,000. But a close below those levels would clear the way for a decline all the way to $8,000. That would be more than a 60 percent correction from the all-time high of $19,891. The selloff began less than an hour after his posting.

Rounding up other major cryptocurrencies, Ethereum was also moving lower, though not nearly so much as bitcoin, dropping 5 percent to bitcoin’s 11 percent over the same 24-hour period. 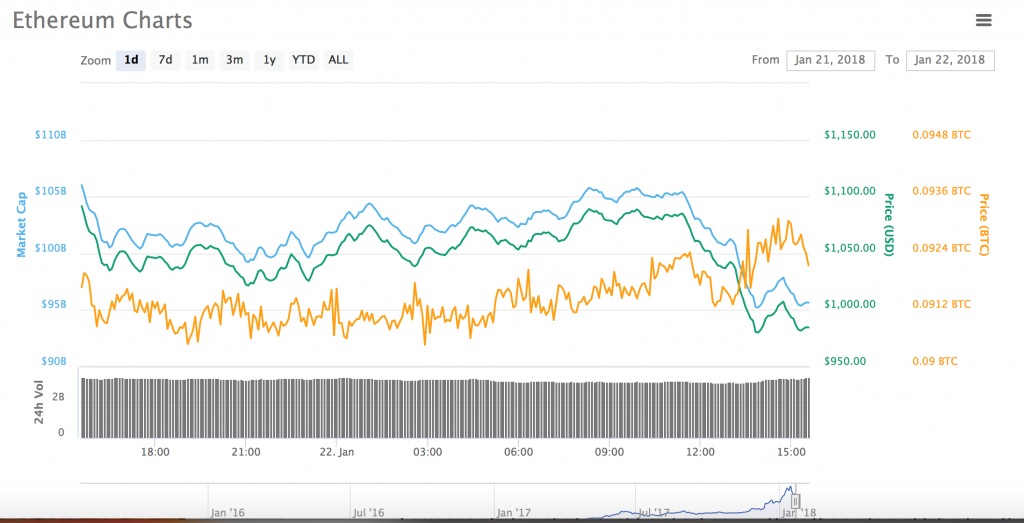 We also saw the same sell-off in Ethereum. The selling began just before 1130 UTC, but accelerated at about 1300.

And Ripple, the darling of the crypto market in 2017, also took a big hit at about the same time. 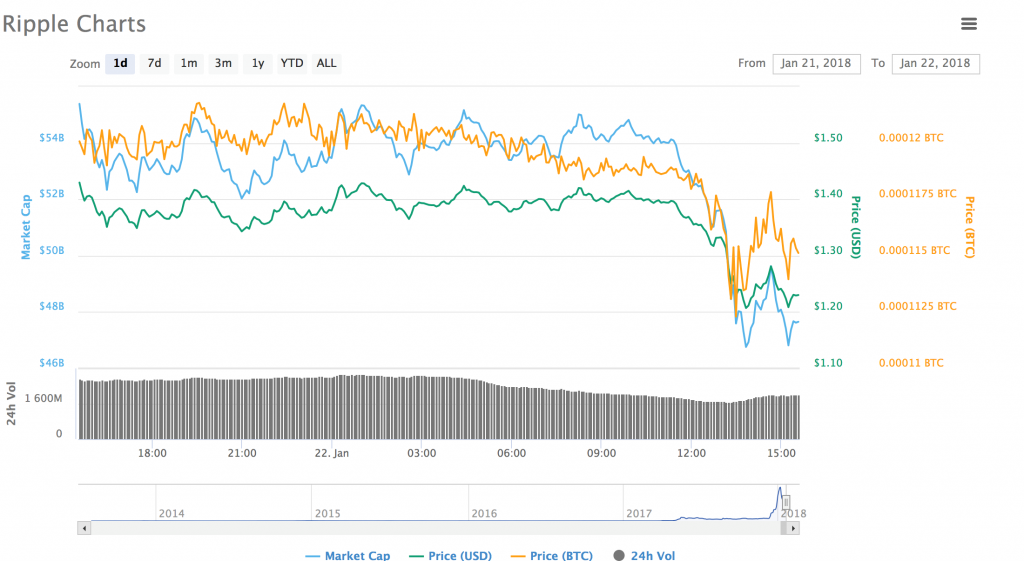 As of this writing, Ripple leads losses for the top 10 cryptocurrencies today by market cap, with a 13 percent drop. Ethereum is down 8 percent and bitcoin down 9 percent. Among the top 10 digital currencies, only EOS is in positive territory today, with a 2 percent gain to $12.85.

So what explains the selloff? It’s impossible to say for sure. But an Ernst & Young report released early today finds that as much as 10 percent of all proceeds of initial coin offerings (ICOs) in the United States winds up getting stolen. That’s as much as $400,000,000 in the U.S. alone.

The most common technique that criminals use to steal digital assets: Phishing, say Ernst & Young researchers.

Other key Ernst & Young findings include:

Wall Street analyst Peter Bockvar, the CIO of the Bleakley Advisory Group, is very bearish about the future of bitcoin, and is predicting a collapse to somewhere between $1,000 and $3,000 within the year.

Why? Bockvar cites a trend of increasing global interest rates – the precursor to many a popped asset bubble over the history of financial markets. Bitcoin arose during a period of quantitative easing, and so tightening financial markets and squeezing out liquidity could take it down a number of pegs. “You have to wonder if we never heard of quantitative easing, would there have been cryptocurrencies?” he said as a panelist on CNBC.

A nice asset bubble pop might be a good thing, as it would reintroduce rationality to markets. To wit: UK penny stock firm Stapleton Capital, a telecom provider, just today announced that the company was changing its name to “Blockchain Worldwide.” Which sent shares up by over 125 percent by lunchtime, Eastern Time  in a textbook example of late-stage Tulip Bulb Mania bubble stupidity.

The company no doubt took notice of what happened when a soft-drink maker, Long Island Iced Tea Inc. changed its name to Long Blockchain, Inc., and saw its share prices skyrocket 109 percent in just days as investors crawled over each other to buy shares.

Goldman Sachs is warning its high net worth investors to beware of a crypto bubble.

“There is no doubt that the rise in bitcoin’s price has pushed it into bubble territory,” the report says. “We also believe that cryptocurrencies have moved beyond bubble levels in financial markets, and even beyond the levels seen during the Dutch “tulipmania” between 1634 and early 1637.”

They do recognize tremendous potential in the application of Blockchain technology in many fields and industries, but the Goldman Sachs position on bitcoin is extremely negative:

“Not only is there no ease of execution, but settlement often takes as many as 10 days. In late 2017, the price discrepancies among 17 US exchanges for one bitcoin amounted to $4,156, or about a 31% difference between the high and low prices.110 Transaction costs have skyrocketed, and frequent hacking has wiped out entire wallets and exchanges of their bitcoin holdings.”

The whole report, written for high net worth investors with $10 million in investable assets or more, is worth a read. 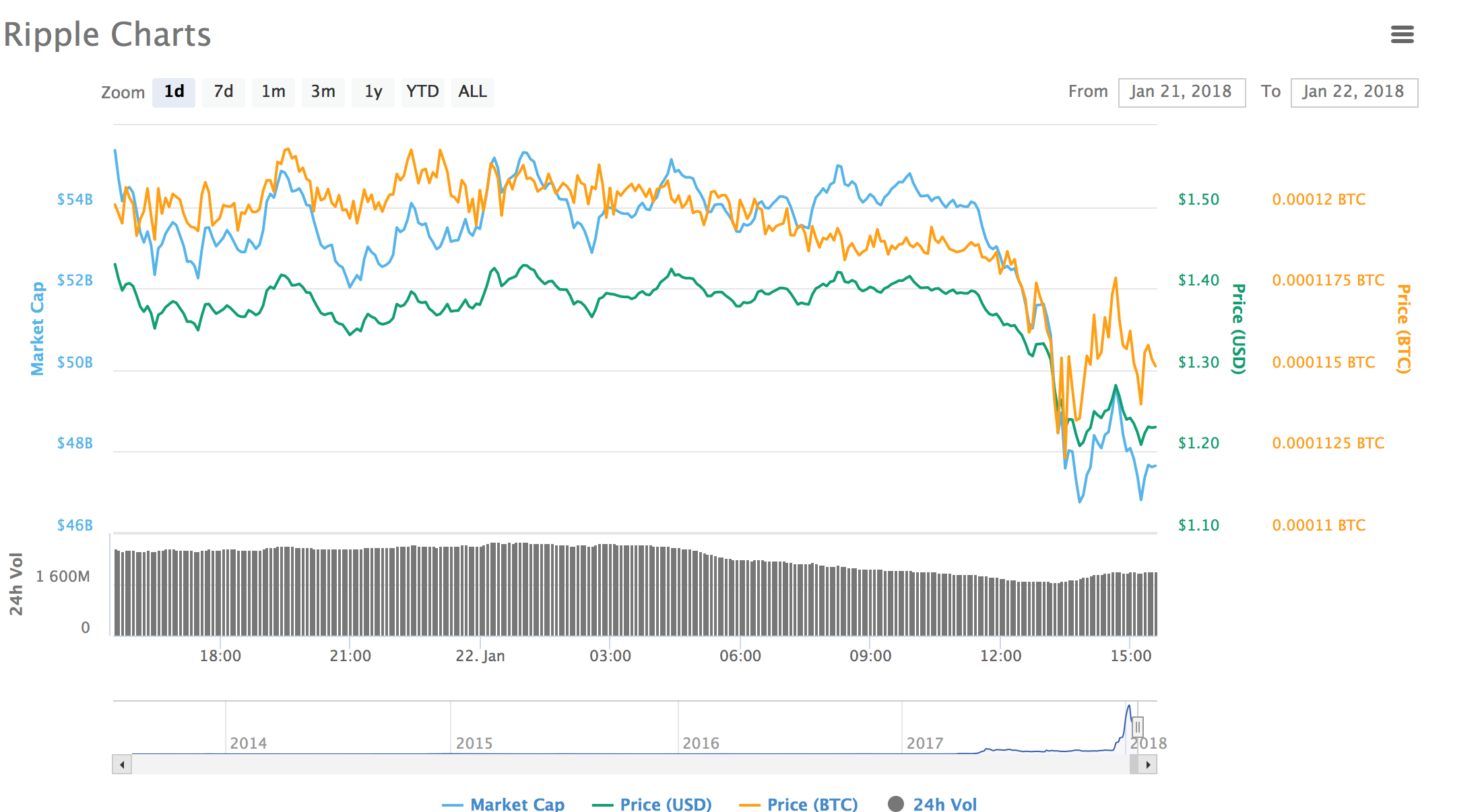 Bitcoin is continuing its phenomenal upward march, trading at $16,7300 as of...
Continue Reading

Breaking up or down? EUR/JPY could bring traders 400-800 pips

EUR/JPY – Will it break up or down?  EUR/JPY has recently made higher highs...
Continue Reading

There is one simple way to identify reversals that are in a trend:  through...
Continue Reading