Ripple Gets a Haircut and Crypto Currencies in Pension Funds? Don’t Laugh

Well, it was fun while it lasted. But Ripple, the runaway ROI winner for 2017 with a 35,000 percent return, is starting to give back some of those gains. Ripple dropped more than 25 percent on Monday, and as of press time, mid-afternoon on the 9th January, has shed another 11 percent so far today.

By contrast, the other two biggest cryptos by market cap, Bitcoin and Ethereum, are holding up much better. At $15,001, Bitcoin held up much better, though it’s down 1 percent so far today, and Ethereum is actually up 7.29 percent today at 1,222.06 – up strongly compared to the $878 it was trading for just a week ago.

Ripple, in contrast, took a dramatic pounding in the couple of days. Look at the sudden downward drop in the price over the weekend and coming into Monday, January 8th. 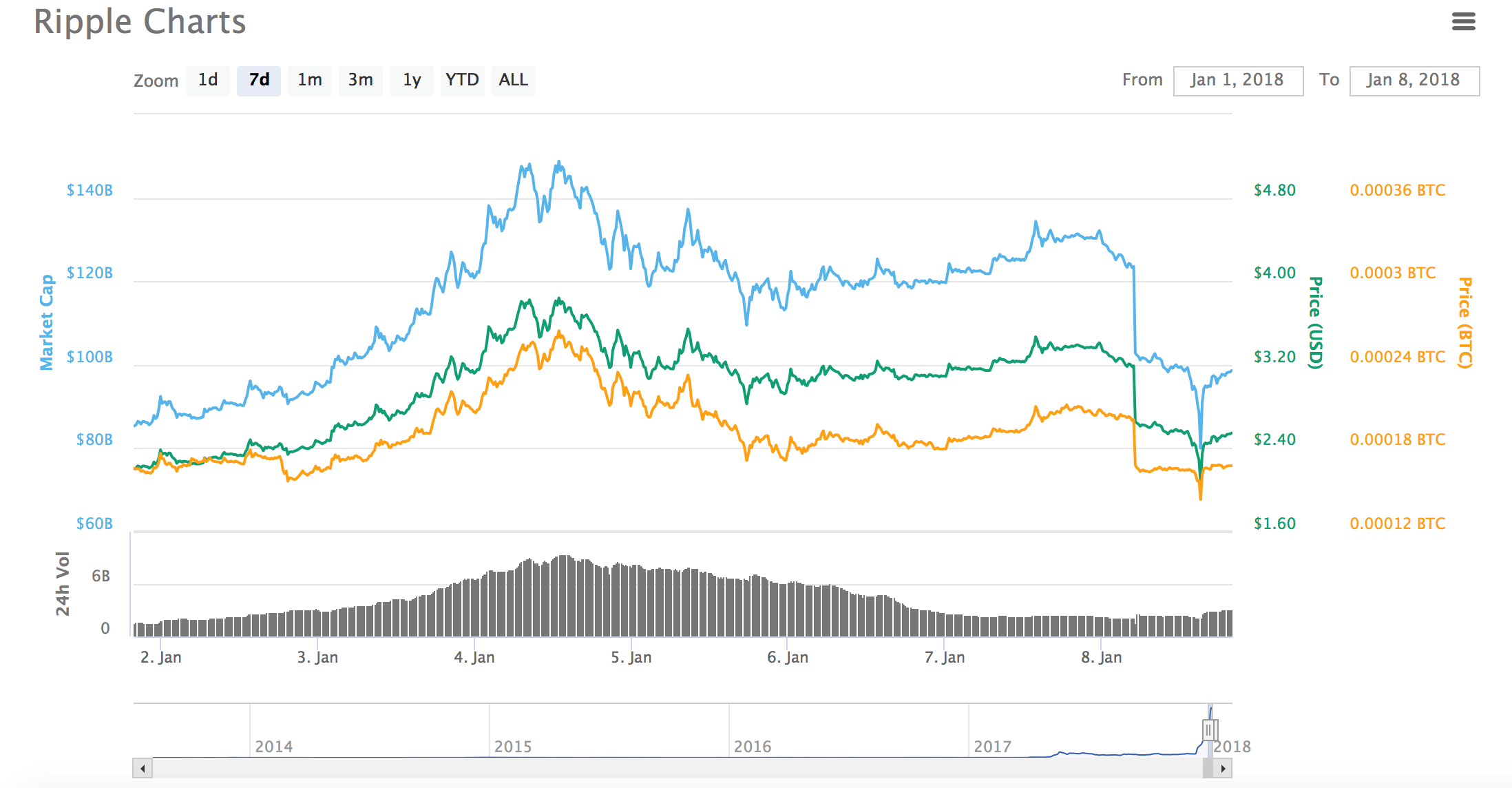 Well, as you can see from the trailing one-week chart above, price and volume seem to be linked. This is what you would expect in an environment of scarcity: Volume increases move prices up, and vice versa.

But let’s take a closer look at how things played out on Monday. 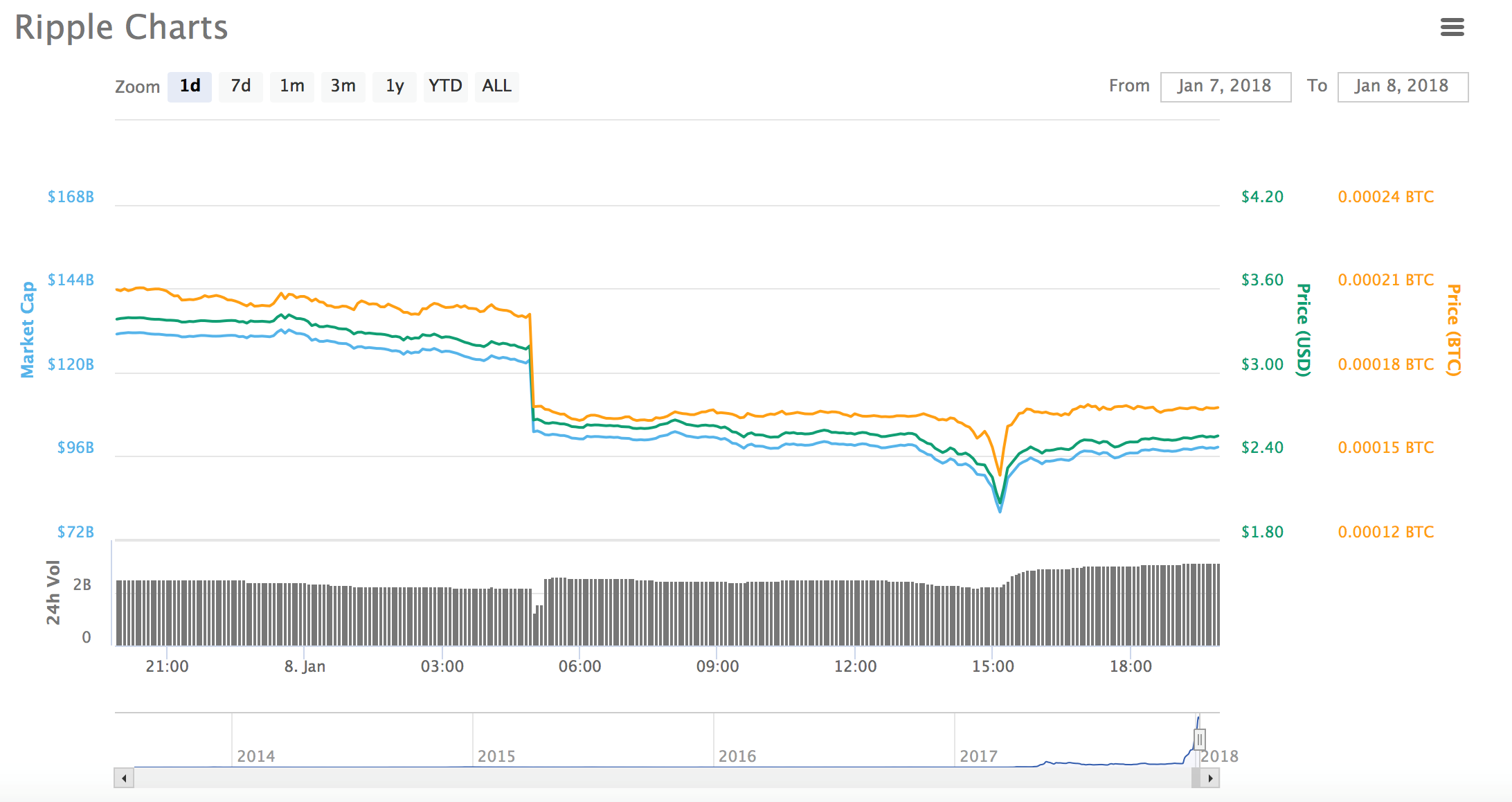 We had a sudden drop in volume, accompanied by a near instantaneous drop in price.

But then buyers stepped in and stabilized the price – at a slightly higher volume level than we had just an hour before.

Then, just before 1500 hours Universal Coordinated time (Eastern time + 5 hours), we see a tiny volume reduction, then a sharp dip, and an equally sharp recovery on increased volume.

Like any scarce commodity, Ripple price apparently responds quickly to even small changes in supply and demand. One other possible factor is that Coinmarketcap’s feed omitted prices from Korea for some reason for a brief period, causing volume to disappear.

Some observers have speculated that the sudden price drops were the result of at least one big bank selling off billions in XRC. But if that were true we’d see a volume spike as the price fell, not a volume drop.

No one in the general public knows for sure, but the price movements could be the result of a data glitch, kind of like when dirty power messes with electronics. Don’t trust markets to be efficient in the short term; especially with cryptocurrencies, which tend to have a fragile price equilibrium. This fragile equilibrium makes them targets for market manipulation, of course, but also for random technology flameouts.

We suspect that many, and possibly all current prominent cryptocurrencies are well overdue for a significant correction.

We also suspect that the financial media will predict twenty-five of the next three actual corrections.

Ripple got a big boost after Bloomberg added it to its trading terminals at the end of last month. That provided access to a tremendous amount of capital, as Bloomberg terminal users didn’t have to resort to the trading equivalent of back alley butcher brokers and platforms to add exposure to Ripple to their portfolios, along with Ethereum and Litecoin. The news resulted in a 300 percent move in all three currencies within just three days.

Trading idea: Identify one or two contenders for the next crypto addition to the Bloomberg Terminal, buy, and wait.

Looking forward, we see some movement towards cryptocurrencies getting some recognition among the academic set as a worthy asset class in itself. Jim Kyung-Soo Liew, a finance professor at the Johns Hopkins University’s Cary Business School has co-authored a paper arguing that pension funds should consider an exposure to bitcoin and other cryptos.

Sure, professors write nutty things all the time. But this paper happens to also be co-authored by Levar Hewlett, who’s a quantitative risk management associate at the Maryland Retirement and Pension System.

No, they aren’t advocating that pension funds back up the truck to load up their pension funds with cryptocurrencies. Their research, based on modern portfolio theory and stochastic modeling, suggests and optimum portfolio allocation of 1.3 percent.

That’s not enough to destroy a pension fund if we see a Cryptogeddon. But if cryptos do well, given their volatility, it could give some adventurous fund managers some alpha to brag about.

Stay tuned for the next update in this space.

And as the chief used to say at the end of every shift brief on Hill Street Blues, “Hey! Let’s be careful out there!”

Article Name
Ripple Gets a Haircut and Crypto Currencies in Pension Funds?
Description
Ripple, the runaway ROI winner for 2017 with a 35,000 percent return, is starting to give back some of those gains. Ripple dropped more than 25 percent on Monday.
Leave a Comment
X

Security is still a serious issue in the cryptocurrency world. Japanese...
Continue Reading

Breaking up or down? EUR/JPY could bring traders 400-800 pips

EUR/JPY – Will it break up or down?  EUR/JPY has recently made higher highs...
Continue Reading

Understanding the Market Movements of the Nonfarm Payroll

Forex traders tend to pay considerable attention to what is happening in the...
Continue Reading