The Asian trading session begins with the opening of the market in Sydney, at 6 PM EDT. However, the real market volatility begins with Tokyo, where the market opens at 7 PM EDT. Japan is the third largest world economy in GDP, and the third largest forex trading center, after London and New York. Since the Japanese economy is heavily based on exports, it’s no surprise that the Japanese yen is the third most traded currency in forex. Other important financial centers in Asia include Singapore and Hong Kong, and around 20% of all forex transactions take place during the Asian session.

The Asian session is the first major market to open, and many traders around the world use it as a benchmark for the upcoming trading day. The following table tabulates the average pip ranges for the major currency pairs during the Asian session. 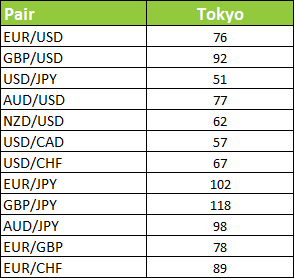 Disclaimer: The pip values were calculated using past averages and are not absolute values. These values can vary depending on volatility and liquidity

The EUR/JPY, GBP/JPY, AUD/JPY and GBP/USD are among the most volatile currency pairs during the Asian session. These are the pair on which risk-tolerant traders should keep an eye on during the Asian session. Japanese exporters are known to participate in the forex market during this session to repatriate their overseas earnings from Europe, USA and Australia, creating high pressures on the mentioned currencies. Australia is also a key importer of ore to Japan, and American investment banks use the Tokyo trading hours to enter into the Japanese equity and bond market.

One more thing to consider is that Japan and China are the largest owners of US treasuries, whose central banks create heavy supply and demand of the USD/JPY pair through their open market operations. Large banks and hedge funds are also known to use the Tokyo open to trigger their stop orders. The mentioned currency pairs thus provide the most trading opportunities, but due to their volatility they are also the riskiest to trade. However, liquidity during the Asian session can sometimes be very thin.

Other currency pairs that include EUR, GBP and CHF are also volatile during the Asian session, as the big players in Europe are preparing for the opening of the London session and position themselves according to the Asian session’s momentum. For traders that are more risk-averse, USD/JPY and USD/CHF are appropriate to trade as their relative lower volatility offer traders the opportunity to implement long-term trading strategies.

Summary
Article Name
The Asian/Tokyo Trading Session
Description
The Asian trading session begins with the opening of the market in Sydney, at 6 PM EDT. However, the real market volatility begins with Tokyo, where the market opens at 7 PM EDT. Japan is the third largest world economy in GDP, and the third largest forex trading center, after London and New York.
Author
ForexTips
Publisher Name
ForexTips
Publisher Logo