The European/London session is the most traded and most volatile session of all. Although Paris and Frankfurt are large financial centers in Europe as well, the real game begins with the opening of the market in London at 3 AM EDT. With the large number of banks and trading firms located in London, this session makes up 30% of all forex transactions.

Most day-trends also start with the London session, and they usually last until the opening of the New York session. Trends that form during this session can sometimes reverse with the trading day in London approaching its end, as the market participants lock in profits and close their positions. The following table shows the average pip ranges during the London session: 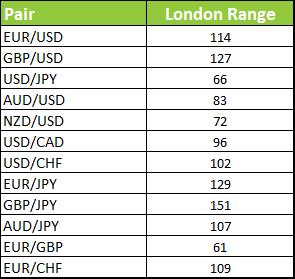 Disclaimer: The pip values were calculated using past averages and are not absolute values. These values can vary depending on volatility and liquidity.

As the table shows, even 9-out-of-12 pairs have an average range of above 80 pips during the London session. The most volatile among them are GBP/JPY, EUR/JPY and GBP/USD. These are pairs for the risk-tolerant traders, as their high volatility offer plenty of trading opportunities and large profit potential in a short period of time.

EUR/USD, EUR/CHF, AUD/JPY and USD/CHF are other pairs with an average range of above 100 pips. As you can notice, there are almost no currency pairs that can’t be traded during the London session. Additionally, the high liquidity decreases the broker’s spread on major pairs, making opening positions less costly than during other market hours. Lower spreads make trading some cross-pairs also more profitable than during other trading sessions.

While the London session is at its peak of trading volume, the opening of the New York session at 8 AM marks the overlap between these two sessions. The overlap lasts until the market in London closes at 12 PM EDT. These four hours are the most active hours in the forex market, and constitute about 70% of the total average range for all currency pairs during the London session, and 80% of the total average range during the New York session. These numbers alone tell that if you are really after the most volatile trading hours but can’t sit in front of the screen all day long, this is the time to trade the forex market.

The London session also offers another overlap – with the late Asian session. When the London session opens at 3 AM, the Asian session is almost over and closes one hour later – at 4 AM. Although, this small overlap is by far not as important as the New York overlap. Traders who want action in the market are better to stay away during these calm market hours.