Who Trades the Forex Market

Some traders think they can’t compete with the “big players” in the forex market: the large banks, large commercial companies, governments, central banks, insurance funds etc. The truth is, you don’t have to compete with these giants. Instead of trying to be ahead of them, you can trade along with them. The market is large enough that no individual bank or company can influence it and most of the time, the “big players” are hit by the same breaking news or volatile market movements as an independent trader would be.

Interest rate changes, inflation and employment reports, natural disasters, almost all news is immediately available to both the “big players” and independent traders. Instead of fearing these large investors, you should read their analysis and forecasts, and try to jump in the same trades as they do. That being said, their forecasts can also be wrong from time-to-time. Let’s take a closer look at the “big players” in forex.

The big banks account for the majority of the transacted volume. The amounts they transact between each other are huge, often hundreds of millions of dollars. The biggest players include Deutsche Bank, UBS, Citi, HSBC, Goldman Sachs and others. Unlike other market participants, banks have the little advantage that they can track their clients’ orders and determine possible buying and selling pressures on specific currencies.

But, due to the size of the forex market ($5 trillion a day), one single bank can’t move the market and influence the prices. They have the same goal of making profit, just like a retail investor. The following chart shows the largest players in forex among banks: 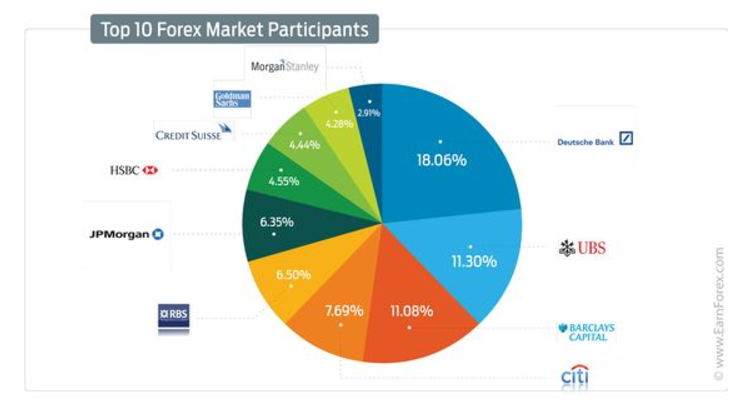 Large companies also participate in the foreign exchange market. From small businesses to large multinational corporations, many companies need to exchange currencies from time to time. Unlike the other participants in the forex, the intention of companies is not directly to make a profit trading currencies. Rather, the nature of their core business makes them buy and sell currencies.

For example, a cheese producer from France selling his products in the United Kingdom, will receive British pounds for the sales. He will exchange the pounds to euros in France, not with the intention to profit on the currency moves. Indeed, large companies want to offset the risk from currency fluctuations, making their profit in overseas markets more predictable. To do so, they will hedge their receivables or fix the exchange rate with currency forward agreements.

The role of governments and their central banks is an important one in the forex market. Central banks don’t trade currencies to make profits, but to facilitate their government’s monetary policies. The role of central banks in developed countries is usually to maintain a stable exchange rate through eliminating excess supply and demand for their national currency, and to target specific inflation rates and low unemployment rates.

To achieve their goals, central banks hold reserve currencies which they buy or sell on the market to stabilize the national currency’s exchange rate, or they can change the key interest rates and influence supply and demand for the local currency. Central banks usually hold dollars as the reserve currency, but recently other currencies like euros or Japanese yens are also becoming increasingly popular. Traders should closely monitor any activities of central banks as they can have a large and long-lasting impact on the value of currencies.

Governments play an indirect role in the forex market, mainly by the sheer volume of money that they are able to invest through public spending and investing. Government debts also play an important role for the value of national currencies, with higher debts usually having a negative impact on the currency.

The forex market, combined with some knowledge and experience, can be very profitable for the individual retail trader. Many retail traders don’t even have a finance background, and are self-taught in forex. Many people with a technical background, like engineers, find forex exciting as they can establish their own strict rules and analyze the market from a technical perspective. To start trading forex, you don’t even need to make large initial deposits. The availability of trading on margin makes it possible to start trading with as little as $50, but opening much larger positions.

Test Your Knowledge: Who Trades the Forex Market

Who Trades the Forex Market?

Article Name
Who Trades the Forex
Description
Although the “big players” still account for the majority of the daily turnover in forex, independent traders have also found their place in the market. Today, Independent traders have the same access to currency quotes and financial news that big banks and institutions have.
Author
ForexTips
Publisher Name
ForexTips
Publisher Logo