What are Currency Correlations?

A correlation is a statistical term that measures to which extent two variables move in the same direction, opposite direction, or completely random in relation to each other.

When applied to the forex market, this means that two currencies can move in the same direction, opposite direction, or completely random relative to each other.

Knowing the currency correlations is very important to reduce risks, as your risk will be doubled when trading currencies with a high correlation coefficient.

The next table shows the correlation coefficients of EUR/USD to other major currency pairs, over a period of 1 week, 1 month, 3 months, 6 months and 1 year.

Make Sure not to Double Your Risk!

When trading two or more currency pairs at the same time, you need to know their correlation in order to avoid adding to your risk. Take a look at the table above, EUR/USD and AUD/USD have a very high correlation of 0.90 over one month, which basically means that when EUR/USD is moving up, so does AUD/USD. And when EUR/USD is moving down, so does AUD/USD. 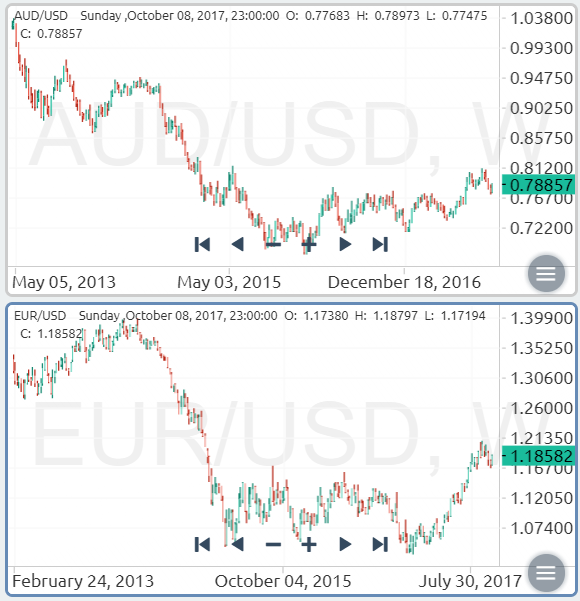 Simply said, you double your risk by opening trades on EUR/USD and AUD/USD in the same direction.

On the other hand, you also don’t want to open trades at the same time on two pairs that are highly negative correlated, such as EUR/USD and USD/CHF, as they will basically cancel each other out, i.e. one trade may be a winner, but the other has a high change to be a loser.

You need to stay up-to-date on the most recent currency correlation coefficients, and many online sites will offer the newest correlation tables. Just do a quick Google search and you will find them.

Currency correlations are important as they can double your risk if your trades are positively correlated (and opened in the same direction), or leave you break-even if the trades are negatively correlated. That’s why it’s important to know the current correlation coefficients, and how to trade them to go in your favor. They can also double your profits if your analysis goes right, but you need to always make sure you trade in the boundaries of your risk management rules!

Test Your Knowledge: What are Currency Correlations?

What are Currency Correlations?

A breakout happens when the price breaks a support and resistance level,...
Continue Reading

Not every trading strategy is suitable for every market environment. Traders...
Continue Reading

Divergences are a great way to determine tops and bottoms of trends, and thus...
Continue Reading